Marin County – Your Escape to Nature

Home » Marin County – Your Escape to Nature
by Jim Haslet 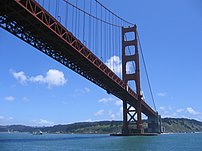 Nature favored Marin County with nature’s best as it is found in the northwestern part of California and had been topographically formed as a peninsula that faces southward to look over the majestic Golden Gate Bridge and the San Francisco Bay. Marin County’s other neighbors are Sonoma and Napa Counties to its north, the Pacific Ocean and its beaches to its west, and the San Pablo Bay to its east. Nature did in fact favor Marin County with nature’s best.

Because Marin County is sandwiched between two prominent bodies of water and as a result of its winter’s rains, it has been proven time and time again to have warmer winters than its immediate neighbors. For just those exact reasons, Marin County was equally blessed with cooler summers which never trigger heat waves, especially near its beaches.

The latest census of the United States Census Bureau estimates Marin County’s total area at 828 square miles; 520 square miles of which are dry lands and the remaining 308 square miles are water. Mother-Nature bless Marin County with breathtaking landscapes of fertile green pasturelands, tidal flats at its shores and the majestic Mount Tamalpais which is Marin County’s tallest mountain reaching 2,600 feet up to its crystal blue skies.

Marin County has also been blessed (or cursed) by the ever threatening infamous San Andreas earthquake fault that runs right through it and is in an unyielding effort ripping the Tomales Peninsula away from its mainland bit by endless bit.

Because Mother-Nature has blessed Marin County so generously, man has been returning the favor by setting up formally protected areas:

– Located in the San Marino Bay, the Marin Island National Wildlife Refuge spans over two islands, the East Marin and the West Marin, and it was established to primarily shelter the largest heron and egret population of the region. This refuge is also a permanent home to many other species of fowl as well as feeding grounds for migratory birds.

– Point Reyes National Seashore is a preserve to over 1,000 species of plants and animals in a breathtaking setting of crashing ocean waves against rugged headlands and gentle beaches, wide open grasslands, rolling hills and wooded crests.

– Muir Woods National Monument is a part of the Golden Gate National Recreation Area (GGNRA), one of the largest urban national parks in the world. GGNRA was established in 1972 and contains 75,398 acres extend from Tomales Bay in Marin County to San Mateo County in the south, encompassing 59 miles of shoreline – one of the nation’s largest coastal preserves.

About the Author:
We can help you make your dream of owning Marin County Real Estate a reality.