Green Tea is Definitely Good for your Health!

Home » Green Tea is Definitely Good for your Health! 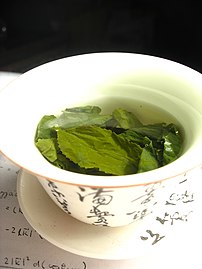 We can all thank the ancient Chinese for drawing our attention to the wonders that may be found in a simple yet pleasurable cup of green tea.

For hundreds of years, green tea was used to relieve headaches and depression in China. The habit of drinking tea has been passed on and today it is becoming popular because of the many benefits being discovered by regularly drinking this relaxing drink.

Tea is actually available in many forms and varieties but basically there are three distinctively different types.

Whether black, green, or red, all tea starts from the harvesting of a warm weather evergreen known as Camellia Sinensis. Once the leaves are processed, this is where the differences in the end product happen.

The longer the leaves are processed, the darker the tea becomes. Thus, green tea is the kind which has undergone the least amount of processing.

Green tea is usually a leaf that has been quickly steamed while the blacks and reds have been dried, crushed and fermented making them appear to be stronger and thus more potent.

Don’t be misled by this visible characteristic, as many believe that the closer it is to its natural state, the more valuable the medicinal and healing properties.

Polyphenols exist in teas and it is an antioxidant which is known to protect our bodies from free radical damage.

The measure of antioxidants is known as the ORAC score and tea ranks higher than many fruits and vegetables so including them into your daily diet is something to be strongly considered.

Aside from preventing blood clotting, studies have shown than polyphenols can decrease cholesterol levels. Consuming four to six cups a day may also reduce gastric, esophageal and skin cancers. Try searching through the internet and you will see the endless list of ailments, aches, and pains that can be relieved by simply drinking green tea.

Among the ailments that have been cured are cancer, heart disease, rheumatoid arthritis, and impaired immune functions.

But many don’t realize that the benefits of drinking green tea may also be found to aid us against digestive disorders, Alzheimer’s and Parkinson’s while raising metabolism and increasing fat oxidation. It’s even reported to help prevent tooth decay by killing the bacteria which causes dental plaque.

Regardless of the reason you might have for drinking green tea, it’s clear that everyone can derive some benefit from daily consumption.

You should be aware however, that not all of the more marketable “herbal teas” are tea at all because many have already been mixed with herbs and spices and other plant parts for flavoring.

These do not offer the health promoting qualities of Camellia Sinensis. You should read ingredients carefully to make certain that you are getting the product that you expect.

About the Author:
Christian Goodman is a well known natural health researcher and the writer of the Natural Health Blog. His latest work is the migraine headache treatment , which has now helped thousands of people cure their migraine naturally.