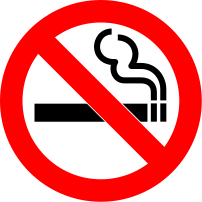 According to www.wikipedia.org over 50% of states are covered by a smoking ban of some form. Depending on your state, the ban includes no smoking in bars, casinos, restaurants and in some cases hotel rooms or even patios. With healthcare costs on the rise, America has had enough and is trying to tell other Americans to get healthy! The smoking bans are not going anywhere, if anything they are only going to get more and more strict.

In 2005 Washington state voted to issue fines of $100.00 to smokers who light up within 25 feet of businesses such as theaters, restaurants and bars according to USAToday, Other states such as Indiana will not allow smoking even at bus stops or ATMs. In many other states healthcare workers are forbidden to smoke during the work day and must sign a contract agreeing to this rule before they are hired. If found in violation of the contract, employees are fired on the spot. Every school district has outlawed smoking on their property even for employees. Other states have taken their smoking bans to another level, in Iowa even smoking in your car anywhere on the grounds with get you a fine USAToday also reports. California, who has been a pioneer in the smoking ban, also became the first state to out law smoking on all of its beaches, These trends have no where to go but up mainly due to people raising awareness among the public.

Second hand smoke was once thought of as nothing more than annoying. However research as shown there is cause for major concern about second hand smoke. Those exposed to second hand smoke are at equal risk as smokers to developing lung cancer asthma and emphysema. The public feels an obligation to keep non-smokers healthy largely due to rising healthcare costs and health problems.

Since California has been one of the major players in the smoking ban, they decided to take it one step further. Just when the public thought the ban couldn’t get any tougher, California added the old one two and included a ban on driving while smoking with children in the car. This law passed in 2007 making it one of the most drastic in the nation according to cigarettehouse.net. It outraged smokers who feel smoking in their own car is their business, however California’s govern and its lawmakers felt differently. Children should not be made to be exposed to second hand smoke.

Some feel by imposing smoking bans on the public, law makers are taking away a smokers right to choose what they do to their own body. While this maybe true, children and non-smokers are not given a choice at all when they are being exposed to second hand smoke. Smokers are still able to smoke in their homes and private property. They are only asked to respect the public who does not want to be around smoke.

Fifty years ago smoking in public places and job sites was widely accepted. It was considered a social thing and not thought of as a dirty habit. However after seeing the effects of smoking many have chose to quit. Banning smoking is replacing the smoking socialization factor of fifty years ago, the new trend is healthy and no one should expect this new trend to go anywhere any time soon.